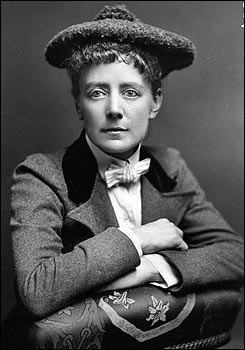 Although her military family did not nurture her musical talents, she was allowed to study under Carl Reinecke and Heinrich Herzogenberg (1843–1900) at the Leipzig Conservatory. It was at Adolph Brodsky's home in Leipzig that she first met Tchaikovsky on 1 January 1888 [N.S.]. Later that month, Tchaikovsky had his photograph taken at a studio in Leipzig and he presented it to Ethel Smyth on 11 February 1888 [N.S.] with the following inscription in German "Miss Smyth zur freundlichen Erinnerung von P. Tschaïkowsky" (For Miss Smyth as a friendly remembrance of P. Tchaikovsky) [1]. In a diary-article written a few months later Tchaikovsky would describe his meeting with her:

Miss Smyth is one of the few women composers whom one can seriously consider to be achieving something valuable in the field of musical creation. She had been living in Leipzig for a number of years already, had thoroughly studied composition theory and written several interesting works, of which the best one is a Violin Sonata that I later heard her play together with Mr Brodsky in a very fine performance. It is a work of great promise, which shows that she has the potential to become a very serious and gifted composer. Since of course no Englishwoman can be without her peculiarities and eccentricities, it is no wonder that Miss Smyth displays some, too — first among these is her beautiful dog, which is inseparable with this young spinster and always dashes ahead to announce her appearance, as was the case on this occasion and on all others which I witnessed. Secondly, there is her passion for hunting, to satisfy which Miss Smyth sometimes goes off to England for a while. And, thirdly, her incredible, incomprehensible veneration, nay, passion for the enigmatic musical genius of Brahms. In her view, Brahms is the culmination of all music, and everything that came before him served merely as necessary groundwork so that, finally, absolute musical beauty could be embodied in the person of the Viennese master [2]. 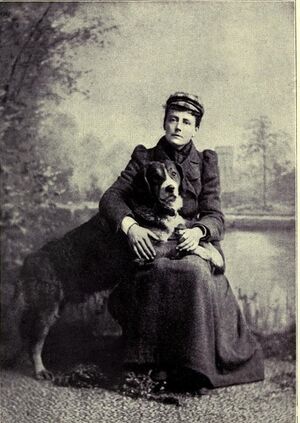 Ethel Smyth with her dog "Marco"

Ethel Smyth's dog, called Marco, was a half-breed St. Bernard which had been given to her by a friend in 1887. Marco's unruly temperament was notorious and he had once almost ruined a rehearsal of Brahms's Piano Quintet at Adolph Brodsky's house in Leipzig by bursting into the room and overturning the cellist's desk. Brahms, however, had taken all this in good spirit, confirming Ethel Smyth's high opinion of his character. In her memoirs she also recalled her meetings with Tchaikovsky in Leipzig as follows:

Of all the composers I have known the most delightful as personality was Tschaikowsky, between whom and myself a relation now sprang up that surely would have ripened into close friendship had circumstances favoured us; so large minded was he, that I think he would have put up unresentingly with all I had to give his work — a very relative admiration. Accustomed to the uncouth, almost brutal manners affected by many German musicians as part of the make up and one of the symptoms of genius, it was a relief to find in this Russian, who even the rough diamonds allowed was a master on his own lines, a polished, cultivated gentleman and man of the world. Even his detestation of Brahms's music failed to check my sympathy — and that I think is strong testimony to his charm! He would argue with me about Brahms by the hour, strum passages on the piano and ask if they were not hideous, declaring I must be under hypnotic influence, since to admire this awkward pedant did not square with what he was kind enough to call the soundness of my instinct on other points. Another thing that puzzled him was my devotion to Marco, of whom he was secretly terrified, but this trait he considered to be a form of English spleen and it puzzled him less than the other madness. For years I have meant to inquire whether dogs play no part in the Russian scheme of life or whether Tschaikowsky's views were peculiar to himself; anyhow it amused me, reading his memoirs, to find Marco and Brahms bracketed together as eccentricities of his young English friend.

On one point we were quite of one mind, the neglect in my school […] of colour. 'Not one of them can orchestrate,' he said, and he earnestly begged me to turn my attention at once to the orchestra and not be prudish about using the medium for all it is worth. 'What happens,' he asked, 'in ordinary conversation? If you have to do with really alive people, listen to the inflections in the voices… there's instrumentation for you!' And I followed his advice on the spot, went to concerts with the sole object of studying orchestral effect, filled notebook upon notebook with impressions, and ever since have been at least as much interested in sounds as in sense, considering the two things indivisible" [3].

When Tchaikovsky was briefly in London in April 1889, to conduct a concert of his own works at the Saint James's Hall, it seems that Ethel Smyth invited him to her house. Tchaikovsky, however, explained in his reply to her that he could not accept her kind invitation because he had to leave London the following day. He also informed her in this letter (written in French) of his recent concert engagements in Germany:

About a month ago I saw Mr Brodsky and his dear wife, and it goes without saying that we talked a lot about you. In Hamburg I spent a whole day in the company of your Idol… JOHANNES BRAHMS!!! He was delightful towards me. He is a very agreeable man, even though my appreciation of his talent does not quite tally with yours…

Goodbye, dear Mademoiselle; I hope that you have composed many fine things, and I wish you every possible happiness.

In her later years Ethel Smyth was a staunch campaigner for women's right to vote, and served two months in a London prison for her cause. However, this did not prevent her being created a Dame of the British Empire in 1922.

2 letters from Tchaikovsky to Ethel Smyth have survived, dating from 1889, both of which have been translated into English on this website:

2 letters from Ethel Smyth to Tchaikovsky, dating from 1889, are preserved in the Klin House-Museum Archive [5].