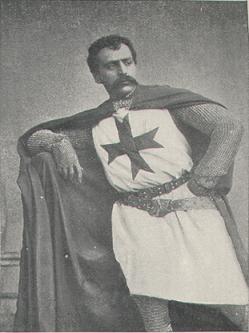 Born in New York of French parents, Eugène lost his father when quite young, and his mother subsequently remarried to an American citizen. Eugène showed an interest in music at an early age and sang in the choir of a local church. After studying law at Yale University he was admitted to the bar in 1879, setting up his own legal practice in 1881. Oudin worked as a lawyer until 1884, when he was engaged by the American Opera Company for minor baritone roles.

In May 1886, Oudin sailed to Europe, and in London he was in high demand as a salon singer at private entertainments for the British aristocracy. Returning to America, he made his first major début in an operetta in New York in August 1886. From 1887 to 1889 he appeared regularly in Viennese operettas at various theatres in New York. It was around this time that he married the soprano Louise Parker, with whom he often performed together in recitals, including a second concert tour of London in 1889.

Two years later, Oudin was in England again to take part in the premiere of Sir Arthur Sullivan's only grand opera, Ivanhoe, at the short-lived Royal English Opera House built by the impresario Richard D'Oyly Carte in Cambridge Circus, London. The premiere of Ivanhoe was on 31 January 1891 and it ran successfully until July. Herman Klein, the distinguished music critic of the Sunday Times, recalled in his memoirs that Oudin had "made a brilliant début in the part of the Templar" and added that the Franco-American baritone had soon conquered London audiences:

I can recall few instances of a popularity so spontaneous as that vouchsafed to Eugène Espérance Oudin. Alike as artist and as man he rapidly became a general favourite […] His voice was singularly sweet and sympathetic in quality, yet not lacking in dramatic power; and none who saw him as the Templar will readily forget the extraordinary dignity of his assumption or the intense passion of his singing [1].

Klein also emphasized Oudin's versatility. He was a fine Lieder singer and translated several French songs into English. Moreover, "he had quite a passion for amateur photography, and loved to obtain unconventional pictures of all the artistic celebrities who would consent to 'sit'" [2].

While in London in the summer of 1891, Oudin also prepared to sing the Dutchman in Wagner's Der fliegende Holländer and worked on the role with the young conductor Henry Wood, but nothing ultimately came of this project. The following year, though, Oudin had the chance of a lifetime when he was invited to sing the title-role in Tchaikovsky's Yevgeny Onegin at the first staging of the opera in Great Britain. Sung in English, this production opened on 17 October 1892 [N.S.] at the Olympic Theatre in London and was conducted by Henry Wood. Unfortunately, Tchaikovsky's opera "met with poor success, and after a few nights was withdrawn" [3]. Still, Oudin's performance as Onegin had been acclaimed, and this would in fact pave the way for his meeting with the Russian composer in the summer of 1893.

On 31 May/12 June 1893, Tchaikovsky boarded a train from London to Cambridge, where he was due to receive an Honorary Doctorate of Music. His fellow-passenger on the train happened to be Herman Klein, to whom he had been introduced in London a few days earlier. In the course of the train journey Tchaikovsky asked Klein why Yevgeny Onegin had failed at its British premiere and to what he attributed this failure. Klein later recalled their conversation in his memoirs:

I replied, without flattery, that it was certainly not the music. It might have been due in some measure to the lack of dramatic fibre in the story, and in a large degree to the inefficiency of the interpretation and the unsuitability of the locale. "Remember," I went on, "that Pushkin's poem is not known in this country, and that in opera we like a definite dénouement, not an ending where the hero goes out at one door and the heroine at another. As to the performance, the only figure in it that lives distinctly and pleasantly in my memory is Eugène Oudin's superb embodiment of Onégin".

"I have heard a great deal about him", said Tschaikowsky; and then came a first-rate opportunity for me to descant upon the merits of the American barytone. I aroused the master's interest in him to such good purpose that he promised not to leave England without making his acquaintance, — "and hearing him sing?" I queried. "Not only will I hear him sing, but invite him to come to Russia and ask him to sing some of my songs there", was the composer's reply as the train drew up at Cambridge, and we alighted" [4].

Gerald Norris, however, has pointed out that in the earliest description of this conversation published by Klein (in the Sunday Times of 12 November 1893 [N.S.]), Tchaikovsky's words are reported slightly differently: "I have heard Oudin, and I am sure he at least must have been excellent [as Onegin]." This would suggest that Tchaikovsky had already made the acquaintance of Oudin and even heard him sing. In fact, as Norris argues, the composer had almost certainly attended Eugène and Louise Oudin's afternoon recital in St. James's Hall, London, on 20 May/1 June 1893, a few hours before he himself conducted, in the same venue, the first performance in England of his Fourth Symphony [5].

Tchaikovsky returned from Cambridge to London on the afternoon of 1/13 June, and that very evening he gave "a dinner for several new London friends" [6]. This farewell dinner — he was leaving for France the following day — took place at the Dieudonné Hotel, where Tchaikovsky was staying in London, and among the "new friends" he had invited were the publisher Emile Hatzfeld and Eugène Oudin. As Klein notes in his memoirs, "Tschaikowsky and Eugène Oudin duly met. The latter sang the "Serenade de Don Juan" [7] and other songs of the Russian master, and so delighted him that the visit to Saint Petersburg and Moscow was immediately arranged" [8]. In his biography of his brother, Modest also describes how Oudin's concert engagement in Russia came about and the sad circumstances in which it would take place:

By evening [on 1/13 June 1893] Pyotr Ilyich was already in London, where he gave a dinner for several new London friends, among whom I should like to mention here the singer Oudin. He was a wonderful baritone who performed almost exclusively on the concert podium. He sang to perfection and enjoyed a colossal success in England. Pyotr Ilyich immediately took a liking to him both as an artist and as a person. On his initiative, Oudin was invited to take part in symphony concerts in Moscow and Petersburg. However, when he arrived in the latter city it was for the funeral of Pyotr Ilyich. This produced a staggering impression on him. He stayed in Petersburg for a while. With colossal success he sang in the memorial concert for Pyotr Ilyich [on 6/18 November], and then appeared as an opera singer with the French Opera Company at the Maly Theatre [in Moscow], but in this capacity he did not achieve any particular success. He returned to England and died there one year to the day [sic] since Pyotr Ilyich's death [9].

Nikolay Kashkin, in his memoirs, recalled his last conversation with Tchaikovsky in Moscow on 9/21 October 1893 just before the composer departed for Saint Petersburg to prepare for the premiere of the Symphony No. 6 (scheduled for 16/28 October). Among other things, Tchaikovsky had told him that after his engagement in Saint Petersburg he was due to conduct a concert in Moscow on 23 October/4 November. "We arranged to meet after the concert at the [Grand] Moscow Hotel, where he wanted to take several people to supper, including the singer Eugène Oudin, who had been invited to the Musical Society at his instruction" [10].

Oudin duly made his début in Moscow on 23 October/4 November, but Tchaikovsky was not at the conductor's rostrum. After the premiere of the Sixth Symphony he had stayed in Saint Petersburg and caught cholera. Just two days after the American singer's introduction to the Russian public, Tchaikovsky's death was announced. Oudin travelled to Saint Petersburg shortly afterwards and sent the following letter to Herman Klein in England:

You have, of course, read and commented on the terribly sudden demise of Tschaikowsky. You can imagine its effect on me! I missed him in Petersburg on my way to Moscow, and there received his message that he would not fail to be present at my début in the latter city. Instead came a telegram of sudden sickness, danger passed, and hope. This was on Saturday last [23 October/4 November]. On Monday morning [25 October/6 November] a telegram came to speak of — death!

On Wednesday last [20 October/1 November] he was sound and well; he drank a glass of unfiltered water from the Neva, and cholera laid him low! It is awful! The musical societies throughout Russia are in mourning, and the concert which was to have been my début in Petersburg (next Saturday, the 11th) is postponed for a week. It will be made up entirely of works of the dead master. I shall sing the 'Arioso' from Onégin and some of his romances, and the joint recital will take place the following day.

So my visit here is prolonged most unexpectedly.

My début in Moscow was a magnificent success. I was recalled and encored again and again, […] and the notices are very fine.

Yours in haste, but ever fraternally

Oudin and his wife, who had come to Russia with him, attended Tchaikovsky's funeral the following day. At the concert in memory of Tchaikovsky conducted by Eduard Nápravník in Saint Petersburg on 6/18 November 1893, Oudin sang Onegin's arioso as well as two songs: A Tear Trembles (No. 4 of the Six Romances, Op. 6) and Serenade: O Child! Beneath Your Window (No. 6 of the Six Romances, Op. 63. Grand Duke Konstantin Konstantinovich, a fervent admirer of Tchaikovsky's music, was present at the concert and he later recorded in his diary: "Some excellent baritone, half-American, half-French, sang superbly in English from Onegin as well as several songs" [12].

Sadly, after returning to England, where he had settled with his family, Oudin did not have long to live himself. In the course of 1894 he appeared in a number of concerts, including a notable performance as Dr. Marianus in Schumann's Szenen aus Goethes Faust at the Birmingham Music Festival in October. But on 4 November, aged just 36, he died in London of the consequences of a stroke. After her husband's death, Louise Oudin abandoned her singing career and became a teacher.