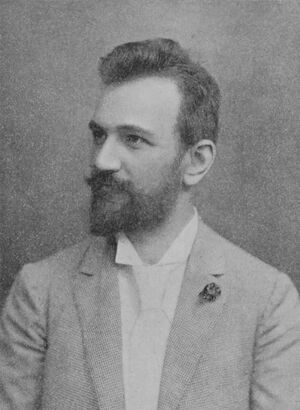 The son of the composer Josef Foerster (1833–1907), who was a professor at the Prague Conservatory, Josef studied at the Prague Organ School (1879–1882), before succeeding Dvořák as organist of Saint Vojtěch (1882–1888). He also taught singing in Prague secondary schools, and at the age of 25 he began a long career as a music and theatrical critic, writing for the newspaper Národní listy.

After marrying the Czech soprano Berta Lautererová in 1888, the couple settled in Hamburg five years later, where Josef began to write for the Neue Hamburger Zeitung, the Hamburger Freie Presse, and the Hamburger Nachrichten. His appointment as teacher of piano at the Hamburg Conservatory proved to be short-lived (1901–1903), when Josef and Berta removed to Vienna, but he became professor of composition at the New Conservatory in the Austrian capital, and from 1910 was music critic for the daily newspaper Die Zeit.

On the formation of the newly-independent state of Czechoslovakia, he returned to Prague as professor of composition at the conservatory (1919–1922), later teaching music at the University (1920–1936). From 1931 until 1939 he was president of the Czech Academy of Sciences and Art.

Foerster was first introduced to Tchaikovsky in Prague when his wife Berta sang Tatyana in the first production of Yevgeny Onegin outside Russia, which opened at the National Theatre on 24 November/6 December 1888, with the composer himself conducting. He unexpectedly met Tchaikovsky five years later during the Russian composer's last brief stay in Hamburg (from 25 August/6 September to 29 August/10 September 1893). Tchaikovsky had arrived in the Hanseatic city to attend the revival of his opera Iolanta on 26 August/7 September 1893, in a production again conducted by Gustav Mahler and with Kathi Bettaque in the title-role. It so happened that in the second half of that evening's double bill Leoncavallo's Pagliacci was given its first performance in Hamburg (though it was not conducted by Mahler), and that Nedda was sung by Berta Foerstrová-Lautererová. As Foerster recalled in his memoirs:

It was a joyful surprise when Tchaikovsky, at the end of the successful premiere [sic. Iolanta had already been staged in Hamburg], was able to show himself onstage amidst the grateful singers. Called out repeatedly, which in Hamburg is not something that occurs every day, he took his bows earnestly in his black frock-coat, holding his pince-nez in his right hand. That evening I was full of impatience as I waited for my wife to come home from the theatre. She was in a state of joyful excitement when she arrived. She had met Tchaikovsky backstage, and both had been greatly surprised: Tchaikovsky had had no idea that his Czech Tatyana had landed up in the ensemble of the Hamburg Stadt-Theater, and 'Tatyana' learnt of Tchaikovsky's presence in the theatre only when Pollini [the theatre's director] dragged him onstage.

Berta passed on to her husband an invitation to visit Tchaikovsky the next morning at Bernhard Pollini's town villa, where the composer was staying on that occasion. Foerster continues in his account:

Already in the entrance-hall I was welcomed by the aroma of Russian cigarettes, and the next moment I found myself in Tchaikovsky's arms as he embraced me. One question followed the other, and many a recollection of dear far-away Prague floated up. We spoke about the previous evening's premiere. Tchaikovsky was delighted when I mentioned the extraordinary impression which the scene with the miracle doctor Ibn-Hakkia had made upon me. 'This is my favourite scene in Iolanta as well', he observed simply, and thereupon began praising repeatedly the excellent performer of that role [a certain Lißmann, who was also acclaimed by the critics], as if he alone had been responsible for the opera's success. [...] He talked about his plans for a trip to Paris, where the Grand-Opéra was preparing Yevgeny Onegin, he spoke about a new symphony [his No. 6 and new creative projects; his manner was free, open, and friendly.

That evening, Pollini hosted a small soirée at his villa, at which the only guests were Tchaikovsky, Mahler, Foerster and Berta. Everyone was in high spirits, according to Foerster, and even Mahler, who was a man of few words, amused the small party by telling them anecdotes about the production of Weber's unfinished opera Die Drei Pintos in Leipzig in January 1888 which he had brought about. "Shortly afterwards we bade each other farewell", Foerster recalled. "Tchaikovsky said Na shledanou! (Czech: "See you again!") several times — he had remembered that phrase from the time of his visit to Prague" [1]. In the course of the evening another matter which had been discussed was Foerster's opera Debora, which had been premiered that year in Prague. Foerster was looking for a German publisher for this work, and Tchaikovsky offered to write a letter of recommendation (Letter 5021) to the publisher Hugo Bock in Berlin, with whom he was on friendly terms. Tchaikovsky was glad to do his young Czech friend this favour because he genuinely believed in his talent: Foerster had sent him personally inscribed copies of many of his works [2].

3 letters from Tchaikovsky to Josef Bohuslav Foerster have survived, dating from 1892 and 1893, all of which have been translated into English on this website:

3 letters from Foerster to Tchaikovsky, dating from 1892 and 1893, are preserved in the Klin House-Museum Archive.