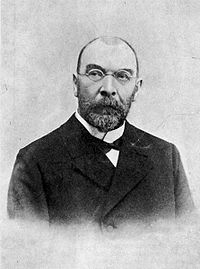 After graduating from the law and philology departments at Kazan University, Smolensky then taught at the city's teacher seminary. In 1889, he moved to Moscow to take up the post of director of the Synodal School (which trained choristers for the Russian Orthodox church services and was also a boarding-school for those pupils who enrolled at the age of 7 or 8), as well as becoming a professor at the Moscow Conservatory. The Synodal Choir was reputed to be one of the best in the world, and although at its public appearances (mostly in the Cathedral of the Dormition) it was only permitted to sing Russian Orthodox sacred music, the choir did study non-Orthodox works, too (including the masses of Palestrina and Mozart), but could only perform these at private concerts. Quite often when Tchaikovsky happened to be in Moscow, Smolensky would organize such concerts for him [1]. From 1901 to 1903 Smolensky directed the Imperial Chapel Choir in Saint Petersburg.

4 letters from Tchaikovsky to Stepan Smolensky have survived, dating from 1892 and 1893, all of which have been translated into English on this website:

4 letters from Smolensky to the composer, dating from 1892 and 1893, are preserved in the Klin House-Museum Archive.