Svyatlovskaya became a soloist at the Bolshoi Theatre in Moscow in 1875 and sang there until 1887. Tchaikovsky wrote favourably of her early performances in his music review articles (see TH 303, TH 312 and TH 313). In 1887, she created the role of Solokha in the opera Cherevichki. In the following years her engagements took her to Germany and (in the 1890s) to London. At the turn of the century Svyatlovskaya also appeared as an oratorio and lieder singer, and in 1904 she set up her own private opera company in Moscow. Apart from Tchaikovsky, she corresponded with several other leading Russian composers (Nikolay Rimsky-Korsakov, Aleksandr Grechaninov, etc.). 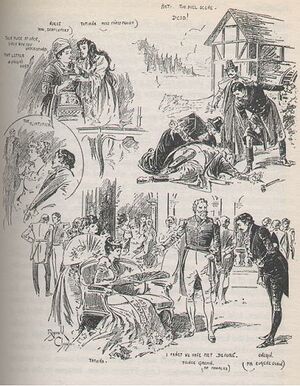 Line illustration from the Daily Graphic, October 1892, reproducing scenes from the first British performance of Yevgeny Onegin in London

She helped to organize many stagings of Russian operas in London, and it is very likely that the first English-language production of Tchaikovsky's Yevgeny Onegin at the Olympic Theatre on 17 October 1892 [N.S.] was undertaken on her initiative. The libretto had been translated by Mrs Sutherland Edwards and the cast included: Fanny Moody (1866–1945) as Tatyana, the Franco-American baritone Eugène Oudin as Onegin, Charles Manners (1857–1935) as Prince Gremin, and Svyatlovskaya herself as the Nurse. On the conductor's rostrum was the young Henry Wood (1869–1944), who would later become such an influential force in British musical life.

This performance was not a success, as the English music critic Herman Klein (1856–1934) would explain to Tchaikovsky on 31 May/12 June 1893 when they happened to be in the same train carriage on the way from London to Cambridge, where the Russian composer was due to receive his Honorary Doctorate from the university. Klein did, however, point out that Eugène Oudin had made a favourable impression as Onegin, and Tchaikovsky would later invite the American baritone, whom he seems to have met just before leaving England on 2/14 June 1893, to perform in Russia [1].

4 letters from Tchaikovsky to Aleksandra Svyatlovskaya have survived, dating from 1887 to 1893, all of which have been translated into English on this website:

8 letters from Aleksandra Svyatlovskaya to the composer, dating from 1888 and 1893, are preserved in the Klin House-Museum Archive.