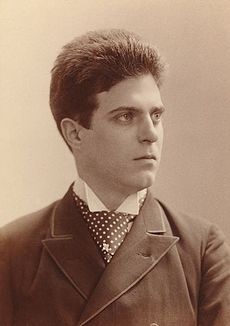 Although they appear never to have met, Tchaikovsky particularly admired Mascagni's opera Cavalleria rusticana, which he first heard in Warsaw on 29 December 1891/10 January 1892. He was very impressed by this work, which had taken the opera-houses of Europe by storm, and in a letter to Nikolay Konradi two days later he wrote: "The opera-house here [in Warsaw] is really quite good. Yesterday I saw for the first time the celebrated Cavalleria rusticana. This opera is indeed very remarkable and especially so thanks to the amazingly felicitous choice of subject. I wish Modya would be able to find me a subject of this kind" [1]. Shortly afterwards he wrote to his brother Modest: "I have seen Cavalleria rusticana twice. It produces a strong impression" [2]. A few months after this interview Tchaikovsky would reject Modest's draft libretto for an opera based on Vasily Zhukovsky's Hindu-inspired poem Nala and Damayanti, adding: "This subject is not particularly close to my heart. It's too remote from life; I need a subject like Cavalleria rusticana" [3] . And in a letter to Modest a few days later, explaining why he could not take up the beloved story of Undina for a new opera on the subject, Tchaikovsky again insisted that he was looking for something in the vein of Italian verismo: "For God's sake, try to find or invent a subject which, if possible, isn't fantastic, something like Carmen and Cavalleria rusticana" [4].

According to Modest, during his brother's unsuccessful visit to Vienna in September 1892 (when he cancelled a scheduled concert) the following coincidence arose: "In the course of this brief sojourn in Vienna [6/18 September–9/21 September 1892] the hotel room in which Pyotr Ilyich was staying happened to be next to the room of Pietro Mascagni, who was then at the peak of his fame in Europe. In those days, of course, there was not a person in Vienna more popular and more loudly fêted than he was. Pyotr Ilyich, as we have seen, liked Cavalleria rusticana — above all the libretto, but apart from that he also saw great promise in the music. The swiftness with which this poor young musician had turned into the idol of all Western Europe did not awaken as much as a shadow of envy in Pyotr Ilyich; on the contrary, it interested him and elicited, rather, his sympathy. And so, finding himself next door to him in the same hotel, he wanted to make the acquaintance of his young colleague, but when he saw in the corridor a whole string of admirers waiting to be received by the young maestro, he decided to do him a favour by not burdening him with an extra visit" [5].

In an interview for the newspaper Petersburg Life in November the same year (see TH 324), Tchaikovsky was asked to comment on the state of music in Italy (amongst other countries), to which he responded as follows:

Until very recently the art of music in Italy was still in a state of great decline. But it seems that now we are witnessing the dawn of its rebirth there. A whole pleiad of talented young composers has emerged, and amongst these it is Mascagni who, quite rightly, attracts the most attention. People are wrong in supposing that the colossal, fabulous success of this young man is the result of skilful marketing. For no matter how much you advertise a work which is talentless or whose significance is but fleeting, you won't get very far and you certainly wouldn't be able to force the entire European public to be transported with fanatic delight. Mascagni is evidently not just a very gifted man, but also very intelligent. He has understood that nowadays the spirit of realism is in the air everywhere, that is the drawing together of art and the truth of life; he has realised that all these Wotans, Brünnhildes, and Fafners are at bottom incapable of awakening keen sympathy in the listener's mind, that man with his passions and misfortunes is closer to us and more understandable than the gods and demigods of Valhalla [6]. Judging from his choice of subjects, Mascagni proceeds not by means of instinct, but rather by dint of a profound understanding of the needs of the modern listener. Moreover, he does not follow the same path as certain other Italian composers, who seek to resemble their German counterparts as much as possible and seem to be ashamed, as it were, of being children of their native country. No, it is with purely Italian plasticity and prettiness that Mascagni illustrates the real-life dramas which he chooses for his operas, and what comes out of this is a work which is almost irresistibly appealing and attractive for the public.

In a later interview, from January 1892, Tchaikovsky was asked for his views on Cavalieria rusticana:

The opera is very good, and sincerely written, with a very interesting story. The author of the opera, Mascagni, is a talented fellow. He is not trying, as many other young composers do, to imitate. He writes with great animation on stories which are very well chosen, his orchestration is completely modern and glittering, and he avoids banality; all of this together contributes to the success of his operas with the public [7].

During a tour with the orchestra of La Scala, Mascagni would conduct, on 7 November 1899, the first performance in Hamburg of Tchaikovsky's Symphony No. 6 [8].