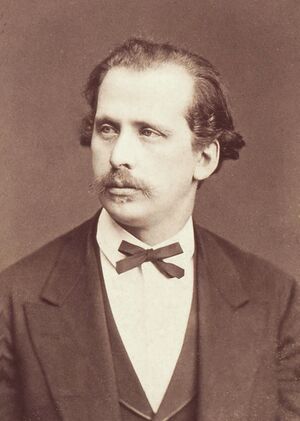 The younger brother of Anton Rubinstein (1829–1894), Nikolay's formative years were spent in Moscow, where his merchant father Grigory had recently opened a small pencil factory, and Nikolay studied piano with his mother from the age of four. In 1844 he was taken to Berlin to study under Theodor Kullak (1818–1882) and Siegfried Dehn (1799–1858); he made his debut in November 1843 aged just eight, in one of his brother Anton's concerts.

From 1851 to 1855 Nikolay studied law and medicine at Moscow University, where he became increasingly popular within the city's literary-artistic circles. In 1860, he was appointed head of the Moscow branch of the Russian Musical Society, where he arranged (and conducted) symphonic, chamber and choral concerts, which became generally popular due to their affordable ticket prices. In October 1860 he established the RMS music classes, which led to the opening of the Moscow Conservatory in 1866, Nikolay serving as its director and piano professor. It was on the recommendation of his brother Anton that Nikolay appointed Tchaikovsky as professor of music theory at the new establishment, encouraged his musical abilities, and even gave him lodgings in his own apartment.

Rubinstein did a great deal to promote Tchaikovsky's music, and between 1866 and 1880 he conducted the premieres of almost every orchestral composition the latter had written. The young composer was very grateful for Rubinstein's support, dedicating more of his works to him than to anyone else (see below). There is no evidence to substantiate the assertion that Tchaikovsky originally intended to dedicate his First Piano Concerto to Rubinstein, but five years later he did receive the dedication of the Second Piano Concerto.

Tchaikovsky was deeply upset to learn of Nikolay's sudden and unexpected death from tuberculosis in Paris on 23 March 1881, aged just 45, and he wrote an account of his passing for the Russian newspapers [1]. The Piano Trio, Op. 50, begun some months later to commemorate his friend, is dedicated "to the memory of a great artist".

Tchaikovsky dedicated seven of his compositions to Nikolay Rubinstein:

19 letters from Tchaikovsky to Nikolay Rubinstein have survived, dating from 1870 to 1880, of which those highlighted in bold have been translated into English on this website:

4 letters from Nikolay Rubinstein to Tchaikovsky, dating from 1877 to 1881, are preserved in the Klin House-Museum Archive.