Tchaikovsky's Symphony in E-flat major (TH 238 ; ČW 443), also known (inaccurately) as his Symphony No. 7, or with the subtitle Life (Жизнь), was abandoned in November 1892 with only part of the first movement having been fully completed, and the remainder left in sketch form.

In 1893 Tchaikovsky adapted three of the movements for piano and orchestra as the Piano Concerto No. 3 and the Andante and Finale, while the remaining movement was arranged for solo piano as Scherzo-Fantasie (No. 10 of the Eighteen Pieces, Op. 72).

In the 1950s the symphony was reconstructed from the manuscript sources and completed by the Soviet musicologist Semyon Bogatyrev.

There are four movements, lasting together around 40 minutes in performance:

In 1889, a year after completing his Symphony No. 5, Tchaikovsky wrote about his idea for its successor to Grand Duke Konstantin Konstantinovich on 29 October/10 November 1889: "I want terribly to write a somewhat grandiose symphony, which would crown my artistic career... For some time I have carried in my head an outline plan for such a symphony... I hope that I shall not die without carrying out this intention" [2].

However, the earliest known sketches for the symphony were made only in 1891, in one of Tchaikovsky's notebooks, and dating from the time of his tour of America. On the outward stage of his journey he noted on the cover of the notebook the date: "Ruan (Rouen) 12 Avril/31 Mars 91" [3]. In this notebook, besides sketches in E-flat major relating directly to the Symphony in E-flat major,are a number of other sketches and a programme note for the symphony, which suggest that the composer was initially undecided about his programme and the music. The first theme he noted was in E minor [4]:

The following sketch was in G major. Above it is the note: "Motif for the finale after Why?At first there is no reply, but then there is the triumphal:

Later there are more themes in E minor and E-flat major.

During his return voyage from America, on 10/22 May, Tchaikovsky noted in his diary: "I walk around the lower deck, work and read. By work, I mean sketches for a future symphony" [5]. On that same day, in a copybook containing sketches for the ballet The Nutcracker and the opera Iolanta,Tchaikovsky sketched a theme in in E-flat minor, dated "22(10) May 91 at sea". The page containing this sketch was detached by the author from its copybook by the author, together with two other pages which contained sketches and an outline programme for symphony, entitled "Life" (Жизнь). On the first of these pages is the note:

The ultimate essence of the symphony is Life.First movement—all passion, confidence, thirst for life. Must be short (finale death—result of collapse). Second movement—love; the third—disappointment; the fourth ends dying away (also short)"

On another page is a note of the theme of the first movement [6]: 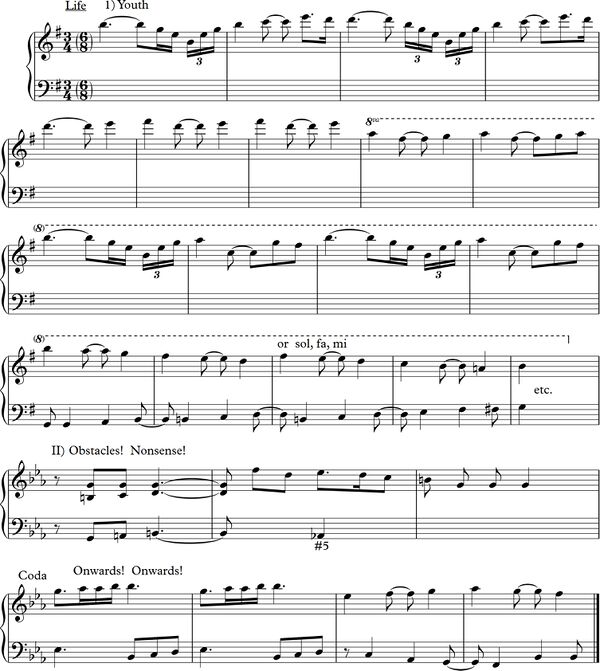 A later sketch is found in a second copy-book with sketches for the opera Iolanta,on which Tchaikovsky worked in June 1891. It has the heading: "For the finale of the symphony in E-flat major".This is the first note establishing the key of the future symphony. This sketch contains two themes: the first in E-flat major, the second in G major. Apart from these, there is also the opening of a second theme in the key of E-flat major—"for the end of the finale".

Undoubtedly work on composing the opera and the ballet prevented the composer from making a start on the symphony. The first references to his work are encountered in Tchaikovsky's correspondence with Aleksandr Ziloti. It appears that Tchaikovsky originally intended to follow his idea of a programme. On 6/18 April 1892. he wrote to Ziloti from Moscow: "... I have even had the idea for a new large symphony, i.e. a symphony with a secret programme. I will spend the whole of April here, May at Klin, and June at Vichy" [7].

The next reference to work on the symphony is found in a letter of 20 May/1 June 1892 to Vladimir Nápravník: "I have lately been immersed in correcting proofs and partly composing a symphony" [8]. On the same day we read in a letter to Nikolay Konradi: " I have... begun to compose a symphony" [9].

By 27 May/8 June [10], the first movement and finale of the new symphony in E-flat major had been composed. as Tchaikovsky reported in a letter to Eduard Nápravník: "After all I told you, in around a month at Klin I drafted two movements of a symphony" [11].

Tchaikovsky originally intended to complete the symphony in July or August 1892: "I need to finish my symphony, for which I have set aside July and part of August" [12]. "I want to finish the symphony at Klin and in August to join you in the country" [13]. But this aim was not accomplished. On 13/25 July, the composer wrote from Klin to Sergey Taneyev: "It looks as though I shall have to spend the next couple of months exclusively on correcting proofs [14], simplifying the arrangement of the ballet, etc. Being unable to write is so frustrating and annoying. In May while travelling abroad, I made sketches for the first movement and finale of a symphony. Abroad I managed to do a little, but now nothing at all" [15]. Tchaikovsky reported the same to Mikhail Ippolitov-Ivanov in a letter of 16/28 July 1892[16], and to Modest Tchaikovsky on 17/29 July: "I have decided not to proceed with the symphony, because I have so much work to do on the proofs" [17].

In response to a request to conduct a concert, wrote on 9/21 August to Pavel Peterssen: "Of course I will agree to conduct for you, but would it not be better at the end of the season? The fact is that I will have a new symphony, which is almost already written already, but the instrumentation will not be ready before Christmas, because I am now immersed in proofs of the full scores of my opera and ballet, as well as their arrangements" [18]. The composer also wrote about the prospects for scoring and performing the symphony to Ilya Slatin on 7/19 October 1892 [19].

By 23 October/4 November the rough sketches had been completed. "Returning home, I set about the symphony. It is finished in rough, and I have begun the orchestration. How it will turn out, I really don't know... In December I'm planning to orchestrate the symphony..." [21].

The evidence of the surviving manuscript shows that by 26 October/7 November (the day of his arrival in Saint Petersburg) the first movement had been orchestrated up to start of the recapitulation.

On 10/22 December, before leaving for Berlin, Tchaikovsky wrote to his brother Anatoly: "Now I my itinerary is as follows: the day after tomorrow (the 12th), I will depart for Berlin. In Berlin I will decide where to take a holiday (in all probability, Nice. Then on 29th Dec (10th Jan) I will be in Brussels, and from there on 15th (3rd) I will travel to Paris for 3 days, then on to Montbéliard to see M-elle Fanny, and around 10th (22nd) January I should be in Odessa, where I'm conducting one or two concerts. At the end of April I'll be in Petersburg. After this I shall settle down for a long stay at Klin, but without fail I shall come to see you at Nizhny before then" [22].

This letter contains no reference to his earlier plans to orchestrate and perform the new symphony, but on 16/28 December, in a letter to Vladimir Davydov, Tchaikovsky declared his intention to destroy it: "These past few days, I have given myself over up to important considerations that are fraught with consequences. I have reviewed carefully and, you might say, objectively, my new symphony, which fortunately I didn't manage to orchestrate and bring out. The impression it makes is not at all flattering. i.e. the symphony was written merely for the sake of having something to write—there's nothing at all interesting or appealing in it. I have decided to throw it away and forget about it. This decision is irrevocable and I'm glad that I have made it" [23]. Tchaikovsky wrote more about his reasons for rejecting the symphony in a letter to Vladimir Davydov of 11/23 February, while he was working on his Symphony No. 6: "You know I destroyed a symphony I had been composing and only partly orchestrated in the autumn. And it was a good job too, because it had little of merit—empty playing with sounds, without genuine inspiration" [24].

However. Tchaikovsky did not destroy the sketches for the symphony, and subsequently used them in the Piano Concerto No. 3, and also for the piano piece Scherzo-Fantaisie (No. 10 of the Eighteen Pieces, Op. 72.

After Tchaikovsky's death, Mitrofan Belyayev published the Andante and Finale, and considered publishing this composition as an orchestral work or movements from an unfinished symphony. However, such a publication did not materialize.

The idea of completely restoring the Symphony in E-flat major from the surviving manuscripts was proposed by the academic Boris Asafyev, but he did not succeed in realizing this concept before his death in 1949. Between 1951 and 1957 Professor Semyon Bogatyrev was able to reconstruct the whole of the Symphony in E-flat major, working from the surviving manuscripts.

Bogatyrev's reconstruction was performed for the first time on 7 February 1957 in Moscow, with the Moscow Region Philharmonic Symphony Orchestra, conducted by Mikhail Terian.

In New York the symphony was first performed at Carnegie Hall on 27 February 1962 by the Philadelphia Orchestra, conducted by Eugene Ormandy.

The full score of the symphony, as reconstructed by Semyon Bogatyrev, was published by Muzgiz in 1961.

Tchaikovsky's unfinished sketches for the symphony are preserved in the Klin House-Museum Archive.

The main theme of the trio in the Scherzo is the Ukrainian folk-song 'The Crane' (Журавель), which Tchaikovsky also used in the finale of his Symphony No. 2, and another variant appears as No. 18 from Set 1 of Mariya Mamontova's collection of Children's Songs on Russian and Ukrainian Tunes.