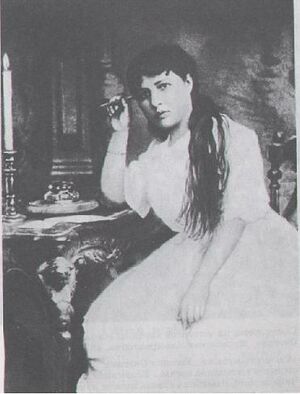 After attending school in Voronezh, Mariya studied singing at the Moscow Conservatory, where she was also a student in Tchaikovsky's classes on music theory. In 1880 she graduated and made her debut at the Bolshoi Theatre in Moscow in the role of Margaret in Gounod's Faust. She remained at the Bolshoi for eight years, and gained a high reputation as a coloratura soprano. During the 1880s she also performed at the Mariinsky Theatre in Saint Petersburg, and toured at the National Theatre in Prague. In 1891 she established a school for singers in Moscow.

Mariya was the first performer of the roles of Tatyana in Yevgeny Onegin in the conservatory students' production of 1879, and of Oksana in Cherevichki at the Bolshoi in 1887, and earned much praise from Tchaikovsky.

13 letters from Tchaikovsky to Mariya Klimentova-Muromtseva have survived, dating from 1885 to 1893, of which those highlighted in bold have been translated into English on this website:

11 letters from Mariya Klimentova-Muromtseva to the composer, dating from 1889 to 1891, are preserved in the Klin House-Museum Archive.